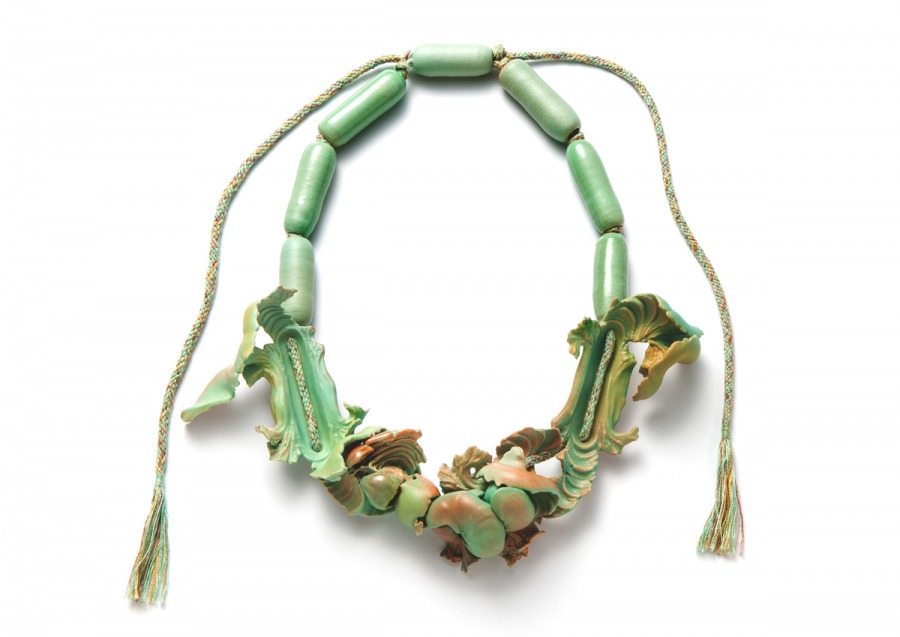 ARTIST STATEMENT – SHIFTING MASS
“Motivated by a desire to work with volume and movement, I pushed, burrowed and dragged my hands through clay, creating dynamic shapes, which I later transformed into necklaces, piecing them together like a jigsaw puzzle.
The directness of clay, its inherently tactile qualities and my unfamiliarity with it afford me an alluringly spontaneous approach and a literal translation of movement in material.
The resulting accumulations are organic – threaded,  hand-braided cord. The soft, muted tones suffuse each of my ceramic necklaces. In matt and shiny glazes I try to capture the flashes of blurred colour seen from a train as it rattles through the Dutch polder landscape.”

INEKE HEERKENS
Born in 1977, lives and works in Amsterdam. She studied at the Gerrit Rietveld Academy – Jewellery department and was an exchange student at South-Carelian Polytechnic Lappeenranta, FI and RMIT University Melbourne, AUS. In 2013 she was a resident at the European Ceramic WorkCentre - Sundaymorning@EKWC - in the south of the Netherlands. Her work has been exhibited in and is collected by many museums, galleries and private collections throughout Europe, Asia and the United States. Ineke Heerkens’ jewellery is represented by Gallery Marzee Nijmegen, NL.