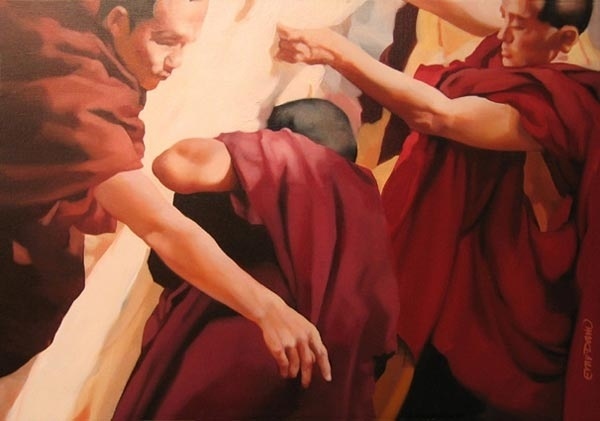 Eva van Dam, born in the Netherlands, studied art and history of art to get an M.A at the Academy of Arnhem. Already during her study at the Academy she clearly excelled in the mastery of various painting techniques.
Her fascination with the Far East dates from the time when she left Holland in 1970 to travel overland to Nepal, by way of Europe, Iran, Afghanistan, Pakistan and India. Arriving in Nepal in september 1970, to stay there for six consecutive years studying buddhism and Tibetan buddhist iconography. In 1974 she was invited by Tulku Urgyen Rinpoche to work in a monastic setting and under the guidance of renowned Tibetan master-artists, on a series of twelve huge scroll-paintings, depicting the life of the historical Buddha.