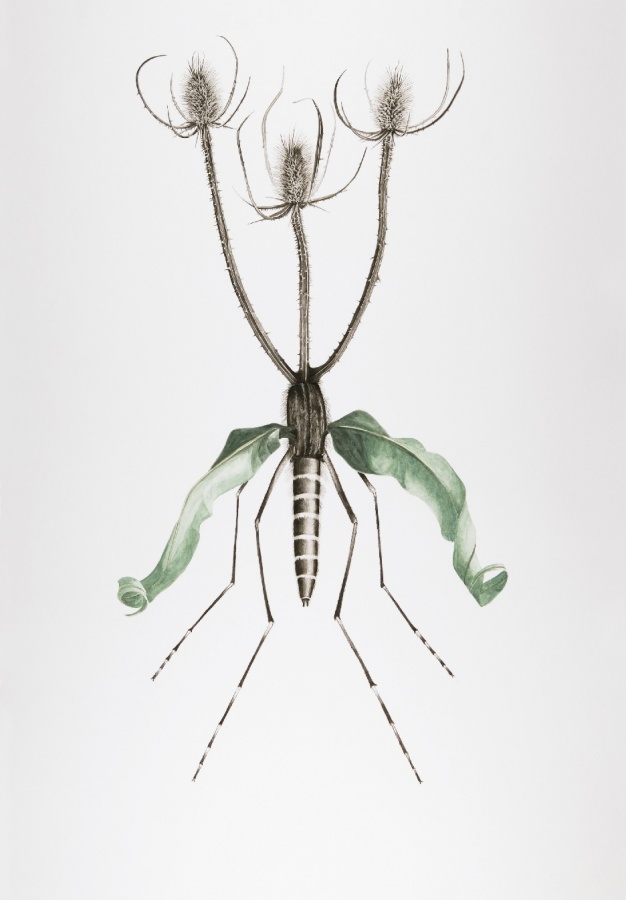 Whilst Anthea Bush works, she tells herself stories of fantastic plants and insects and of the worlds that they inhabit. Her starting point is to dissect literally and metaphorically the insect or plant in front of her and from there reconstruct an alternative reality. As she does this she is simultaneously exploring and investigating the physical world and creating a new, imaginary one.

She feels a connection to 16th century botanists, through her desire to understand the world through a detailed process of recording and collecting. Akin to early botanists she often focus specifically on the fragmented plant image. Her interest lies in the fertile border where science and art interrelate.

Her drawings offer an alternative version of the flora and fauna we know. These are images of future life forms, a possible result of genetic manipulation and modification or perhaps natural evolution.

Her drawings are in watercolour and ink. She finds the minimal simplicity of this medium fascinating; she is attracted to its unforgiving nature. She sees a relationship to the material and the subject matter, as once a mark as been made on the paper it cannot be removed, one can only go forwards with the drawing. The material properties of watercolour and ink are connected in an abstract way to the natural world, as both are evolving.

Both have their own worlds, their own existence. Bush takes the role of narrator.

Anthea Bush was a resident at De Ateliers Amsterdam and has exhibited in various locations within the Netherlands and abroad.